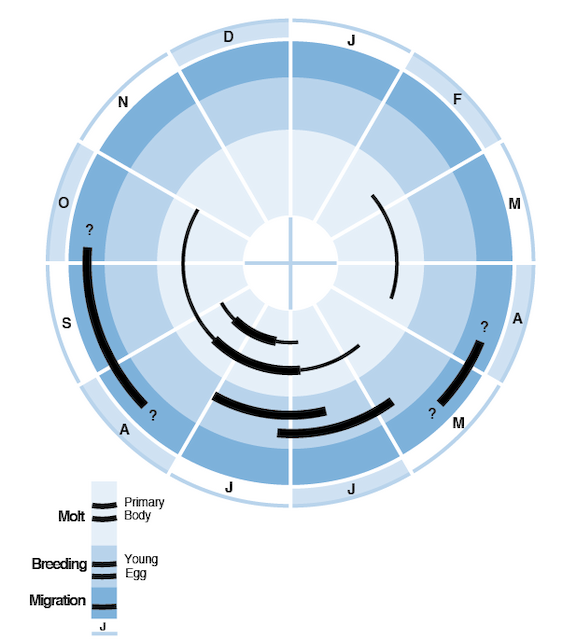 Annual cycle of breeding, molt, and migration of the Kirtland's Warbler. (Thick lines = peak activity, and thin lines = non-peak activity.)
Kirtland’s Warbler (Setophaga kirtlandii) is a migratory songbird that nests exclusively in young jack pine forests in northern Michigan, Wisconsin, and Ontario, winters in dense scrub in the Bahamas archipelago, and favors scrubby habitat during migration. The species was brought back from the brink of extinction in the mid-20th century through decades of intensive management action by conservation biologists.

Identification
Kirtland's Warbler is a relatively large, long-tailed, and heavy-billed wood warbler (family Parulidae). The plumage is generally bluish-gray on the upperparts and lemon yellow on the underparts, and it boasts a broken white eye-ring.
​
Why did Kirtland’s Warbler almost go extinct?
Kirtland’s Warblers have probably always been rare, due to their narrow breeding habitat requirements. Fire suppression starting in the 20th century disrupted the pattern of periodic wildfires needed to create new breeding habitat, which is only suitable for Kirtland’s Warblers for 10–15 years before the trees grow too large. Human-caused changes to the landscape also allowed the Brown-headed Cowbird, a nest parasite, to expand its range into the primary nesting areas of Kirtland’s Warbler.

​Why does Kirtland’s Warbler still need help?
​Kirtland's Warbler has been dubbed a conservation-reliant species, as it now depends upon people to continually renew young jack pine and Bahamian scrub habitats and alleviate other threats, including nest parasitism by Brown-headed Cowbirds. Climate change may cause changes in the distribution of suitable breeding habitat and loss of winter habitat from rising sea levels.

To learn more about Kirtland's Warblers, visit the species profile on All About Birds.
​(Image courtesy of the Birds of North America)​

Header Photo: Nathan Cooper
Funding for this website has been provided by the ​Herbert H. and Grace A. Dow Foundation.